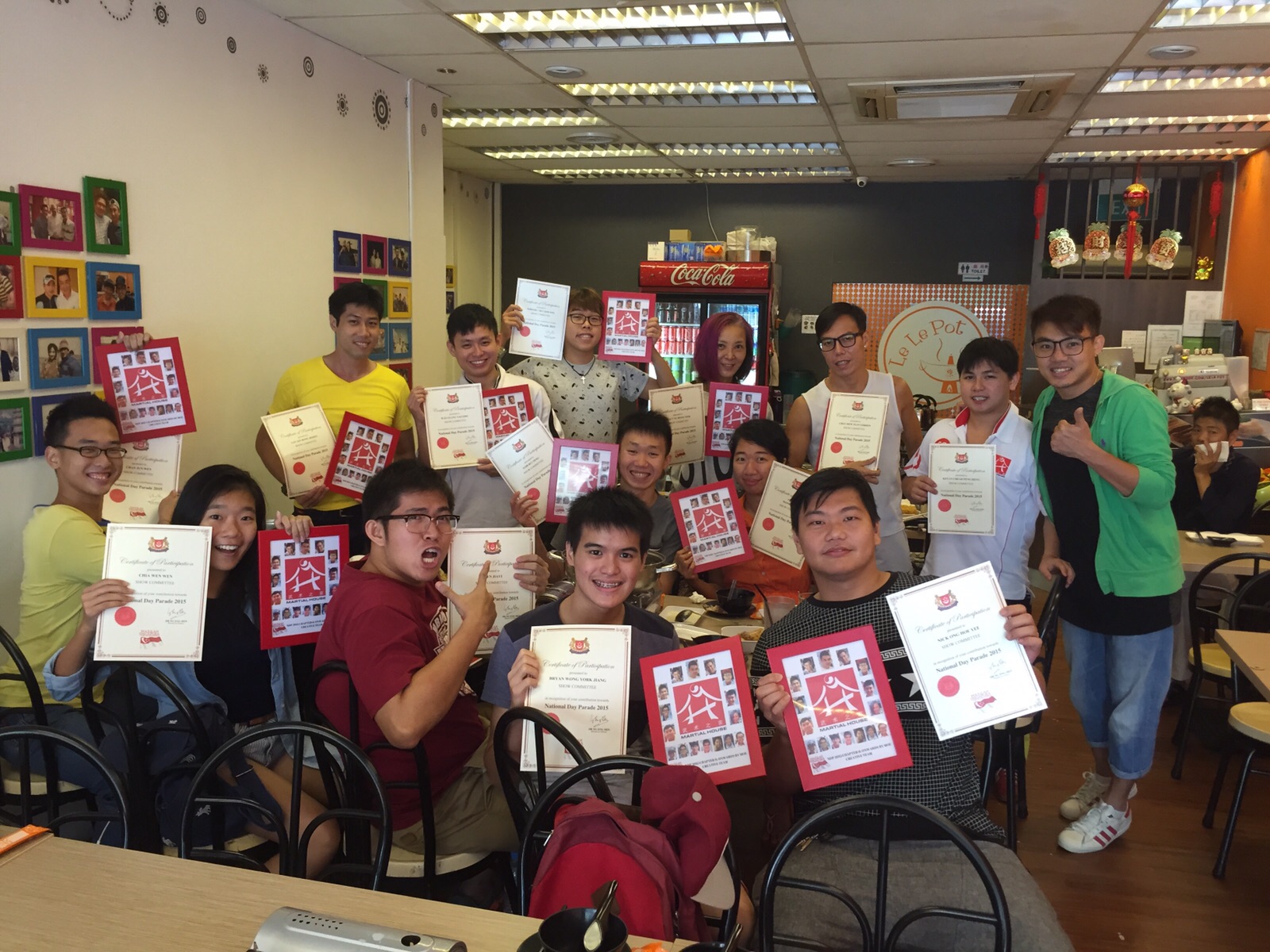 Besides the sumptuous steamboat buffet, certificates were also presented to each member of the Creative Team in recognition of their time, effort and contributions. A special gift was also prepared by Martial House Choreographer Wan GuangYao Eric & Chen Jiayi for each of the members!

The NDP 2015 journey was a tiring yet satisfying one for Martial House. Once again, a big thank you to the various parties who have contributed to the success of NDP 2015 and hopefully, Martial House will continue to be part of many more fun and exciting performances and events!

On 23 August 2015, Singapore’s Prime Minister (PM) Lee Hsien Loong delivered his National Day Rally at ITE College Central. The rally was broadcasted “live” on national television. Nearing the end of his rally, PM Lee mentioned that there were two special moments for him during the SG50 National Day Parade and one of it was the final act “Onwards – Bright Future” by the Ministry of Education (MOE) contingent, choreographed by the Martial House Creative Team. During the rally, PM Lee said “The last item, the kids were in bright LED costumes, putting on an energetic and spectacular performance… They were in high spirits. Their fads shone with excitement and hope. I thought to myself, these are the faces of the future of Singapore.” After the rally, the message was also posted on PM Lee’s Facebook page.

Indeed, that was the spirit the Martial House team and 680 student performers hoped to portray during the act. It was such a great honour and pleasure that the performance has left such a deep impression on PM Lee! PM Lee’s comment has definitely made the NDP experience even more memorable for everyone in the team, especially to the young performers. Looking forward to these kids sharing their experiences with their children or even grandchildren at SG100! 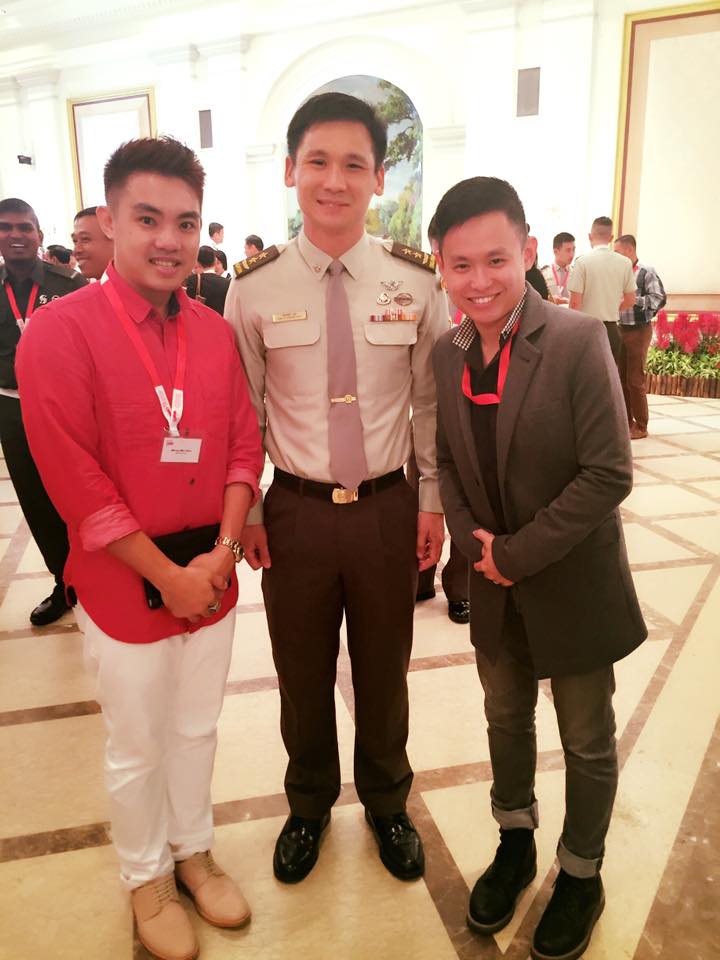 If you were watching the news on television last night, you may have caught a glimpse of a familiar face. He is none other than Martial House Coach & Choreographer, Mr. Wan GuangYao Eric!

On 19 August 2015, Martial House Managing Director, Mr. Leo Wen Yeow and Mr. Wan were invited to attend a thank-you reception, hosted by His Excellency, President Tony Tan Keng Yam, at the Istana for the organisers and participants of this year’s National Day Parade (NDP).

The event was reported in the news and many could spot Mr. Wan on national television across three different channels, namely: 1. Channel  5

Among the guests at the event were: 1. Chairman of NDP 2015 Show Committee, Colonel Tan Cheng Kwee

It was indeed an honour for Martial House to be part of this year’s SG50 NDP celebration and to be invited to the thank-you reception.

Under the guidance of Martial House Choreographers, Wan GuangYao Eric and Gordon Choy, a team of Martial House youth leaders have been working hard to prepare the Ministry of Education (MOE) contingent of more than 600 primary school students for the upcoming National Day Parade (NDP) 2015!

The Martial House youth leaders are part of the Creative Team which is responsible for the design and choreography of movements, as well as coordinating and training of students for the final act.

It is definitely challenging for the youth leaders to prepare these students for the such a massive performance. Besides the constant encouragement and support the youth leaders gave one another, the smiles on the faces of the students also provided leaders with an extra motivation to stay hyper and enthusiastic throughout the long hours of rehearsals!

During the act, students are required to perform their dance choreography, change the colours of the LED lights on their costumes and display various formations according to the rhythm and tempo of the music!

To deliver a spectacular performance, rehearsals are inevitable. A big thank you to all the various parties for making each rehearsal possible! With one month to the actual NDP 2015, hope Singaporeans are looking forward to the MOE contingent performance prepared by Martial House!

On 8 March 2015, the participants of Chingay 2015 Wushu contingent had the opportunity to reunite once again! This is made possible thanks to People’s Association (PA) for organizing the Wushu: Resilience in Motion Get-Together event!

The appreciation event was specially prepared by PA to thank all the members of the organizing committee, trainers and participants for all the time, effort and dedication they have put in to make the Chingay performance a successful one! https://www.youtube.com/watch?v=fsYiBN4mb-8&feature=youtu.be PA has also prepared an appreciation video for all participants of the Chingay 2015 Wushu contingent. Some of the Martial House Stars are featured in the video! Can you spot them? This Chingay experience is definitely a memorable one for many as it was the first time Wushu enthusiasts across Singapore unite together to deliver such a massive performance! Hopefully, there will be more of such opportunities and platforms in the future! P.S. If you missed the “live” show and the repeated telecast of the Chingay Parade 2015, you may watch in on xinmsn by clicking here!