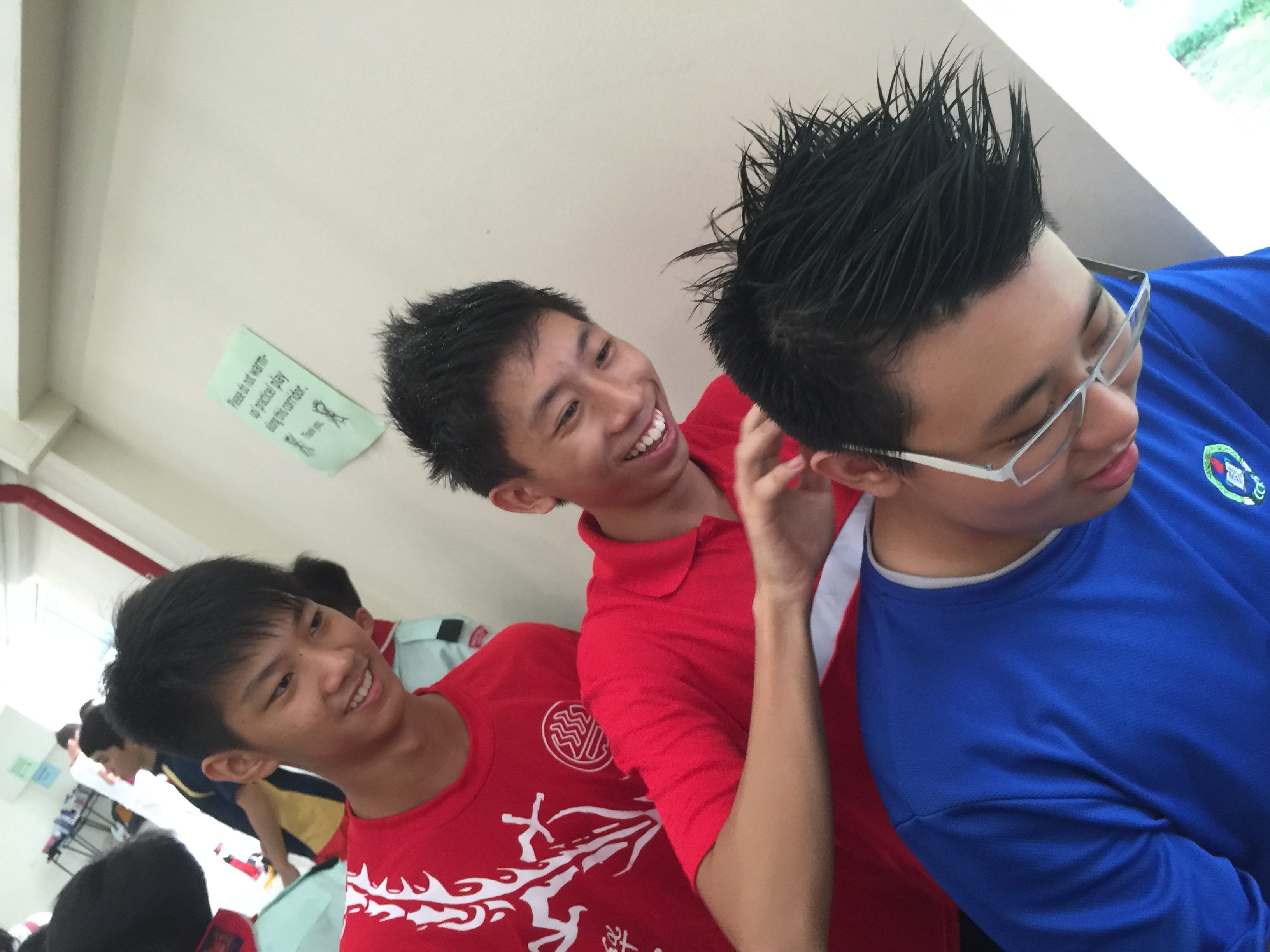 It was another day of intense competition at Chung Cheng High School (Main) with a total of 11 individual events.

The athletes from Martial House have done well and attained a total of 5 Gold, 4 Silver and 3 3rd Runner-Up medals from today’s events!

Before each participant executes his/her routine on the court, there are tons of preparations that need to be done. This includes hair styling and make-up. Special thanks to all heroes behind the scene who have helped make the athletes look suave and beautiful, boosting their confidence and thus, enabling them to enhance the quality of their routines.

Tomorrow is the last day of competition to be held at Chung Cheng High School (Main). The competition will be held at Toa Payoh Sports Hall thereafter. All the best to all participants with upcoming events! 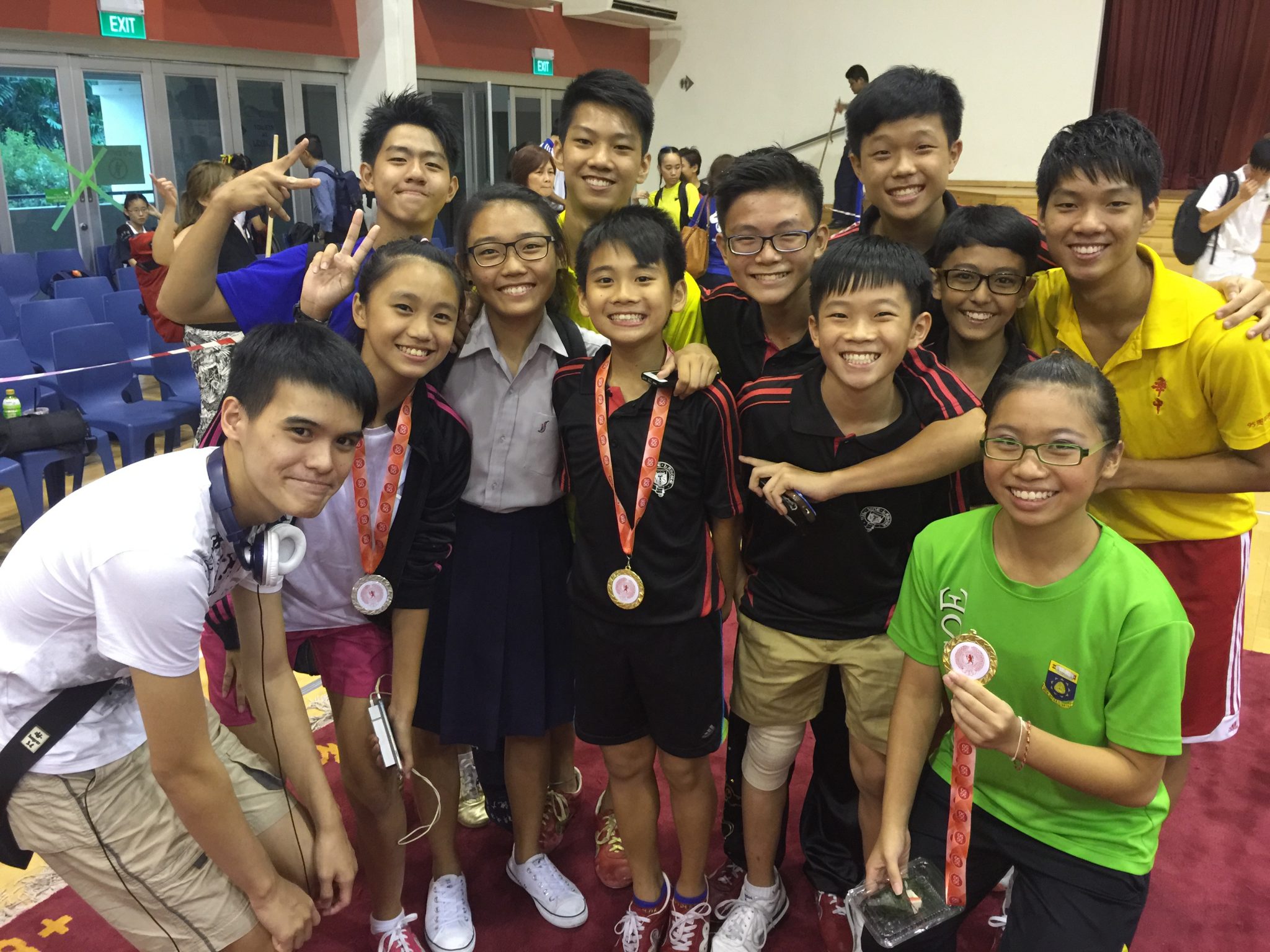 After nearly a week of break, Wushu athletes from secondary schools and junior colleges have once again gathered at Chung Cheng High School (Main) for the National Inter-School Wushu Championships 2015!

Day 3 of the competition was a great one for the Martial House athletes, whom have achieved a total of 6 Gold, 4 Silver, 4 Bronze and 2 3rd Runner-Up medals!

Congratulations to all medallists and keep up the good work! We are now at the halfway mark of the National Inter-School Wushu Championships 2015. Martial House and Wushu Daze would like to wish all participants the best of luck for their upcoming events! 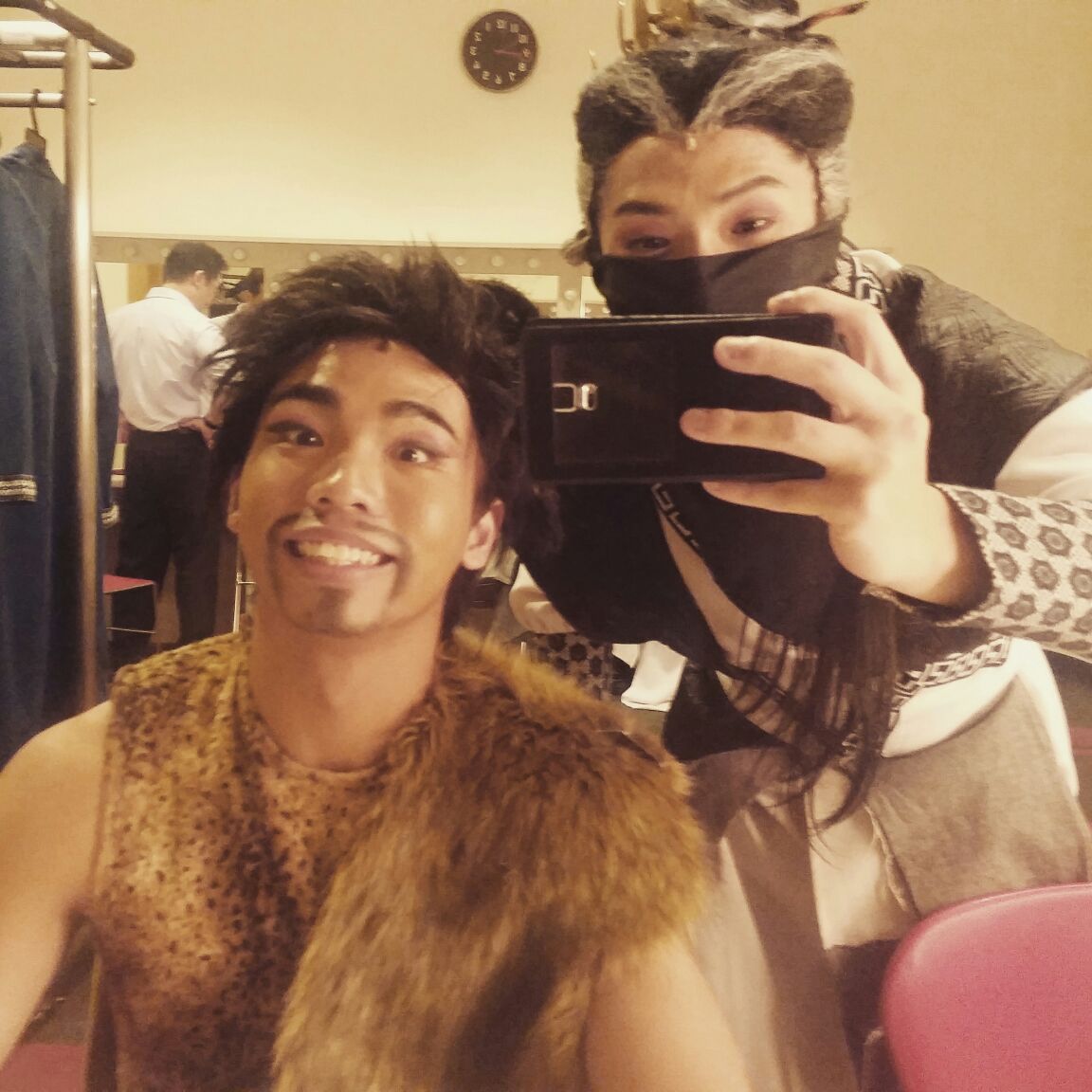 https://www.youtube.com/watch?v=qfa-lN9Xdlk Have you watched the theatre production “Legends of the Southern Arch”? If you have not, you should as you will be able to catch three of the Martial House Stars in action!

Martial House Artistic Consultant & Choreographer, Gordon Choy is in-charge of the Fight Choreography for the production. He is also one of the casts, along with Martial House Stars Yap Wei Ren and Koh Jing Sen!

When asked about his experience as a cast, Wei Ren replied, “Though it is tiring, the experience is great so far! The people are fun and I learnt a lot from them. And I would encourage you guys to watch the production as there will be many exciting stunts and effects going on on stage!” The “Legends of the Southern Arch” has started showing since 27 March 2015 at the Drama Centre Theatre. The last show will be on 12 April 2015. To find out more about the production, click here to visit the SISTIC website.

This is a gentle reminder to all parents and students that there is no class at Hong Wen School (Indoor Sports Hall) on 3 April 2015, Friday as it is a public holiday. 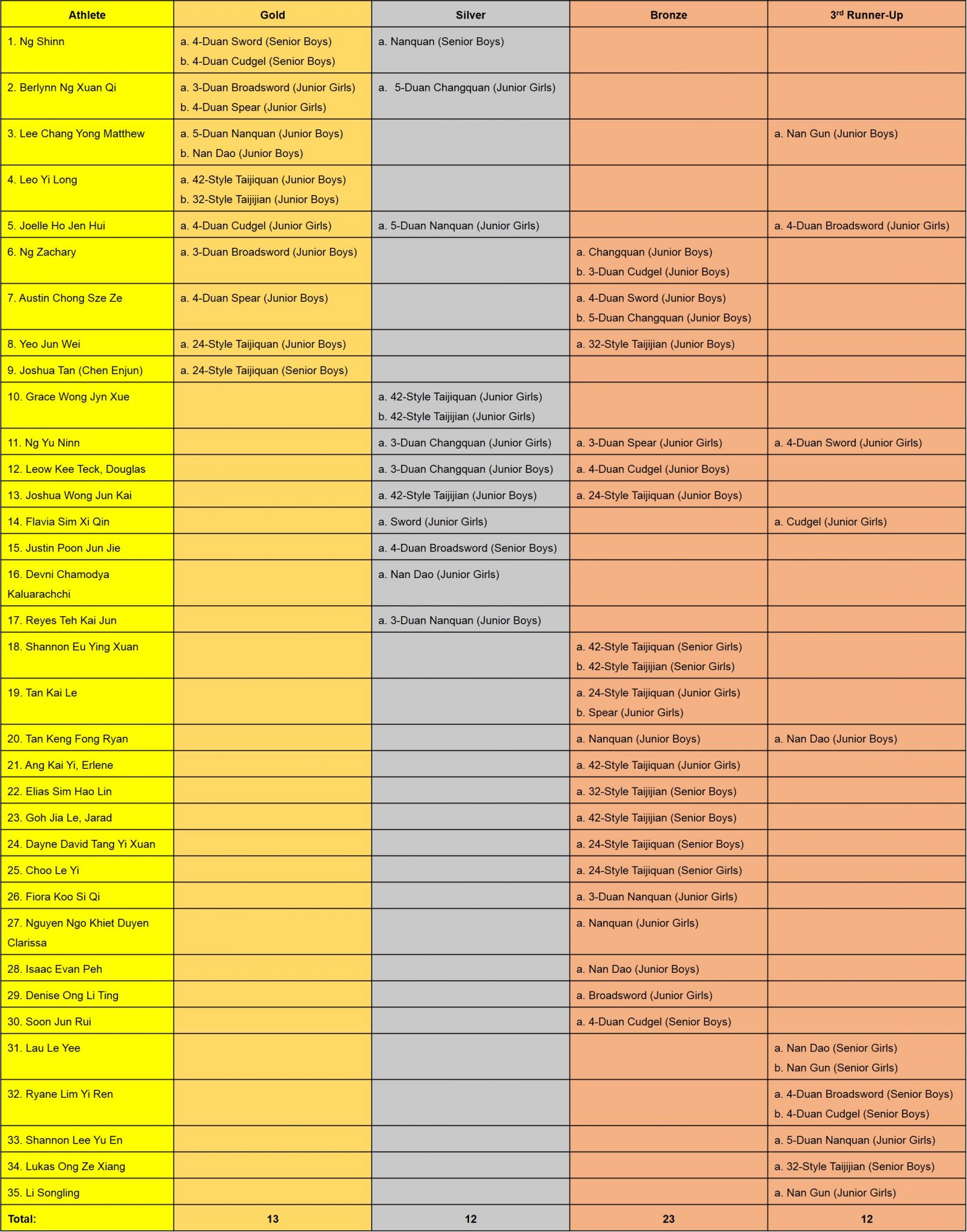 Finally, we have come to the end of the 11th National Primary Schools Wushu Championship 2015! The final day of the competition was held at Toa Payoh Sports Hall, where the various schools battled it out in the group events.

This year, more than 1,000 student athletes across 106 schools participated in the competition and Martial House is proud to announce that De La Salle School has attained the Overall 3rd Runner-Up for both Junior Boys and Junior Girls divisions!

De La Salle School’s achievements are the fruits of labour of Martial House Coach Leo Rui Yan (Reann) and the students from the Wushu team. When she was asked to share her thoughts and emotions with regards to De La Salle School’s outstanding results this year, Coach Reann said: “It was a journey that began short of a decade and a half ago, when we worked on just the traditional routines to inculcate within our students a culture of fundamentals of martial arts. Fourteen years later, with immense support from teachers and parents of the De La Salle Wushu team, the students have achieved Overall 3rd Runner-Up for both Junior Boys and Junior Girls divisions! Beyond teachings of the art, the team has also displayed characteristics of maturity and understanding, that winning and medals are but of mere importance, with the most integral of values being earnestness and humility, with teamwork and cohesive learning being the pillars of a successful process. I’m grateful for this opportunity and I would like to thank my fellow coaches from Martial House who have supported and helped me in grooming the kids from De La Salle School. I am only looking forward to more amazing times ahead!” Once again, congratulations to De Le Salle School and Coach Reann!

The annual competition also provided a platform for participants to interact and build friendship regardless of where they came from. When the coaches and students from Martial House and Wufang Singapore cheered for one another, it was like an reenactment of Chingay 2015 once again!

Martial House is also pleased to announce that its student athletes have achieved a total of 60 medals in the 11th National Primary Schools Wushu Championship 2015! Well done Martial House Stars! The consolidated results can be found below:

Martial House would like to thank all parents, teachers and coaches for playing multiple roles during the competition. From being makeup artists to hair stylists, from being cheerleaders to photographers. Without the endless support given, the student athletes would not have shine so confidently on the arena.

Also, to the students who have performed well, keep up the good work and continue to work hard. To students who did not perform up to expectation, do not be discouraged. With the determination and perseverance, you turn to shine will eventually come. Remember, the sky is your limit! 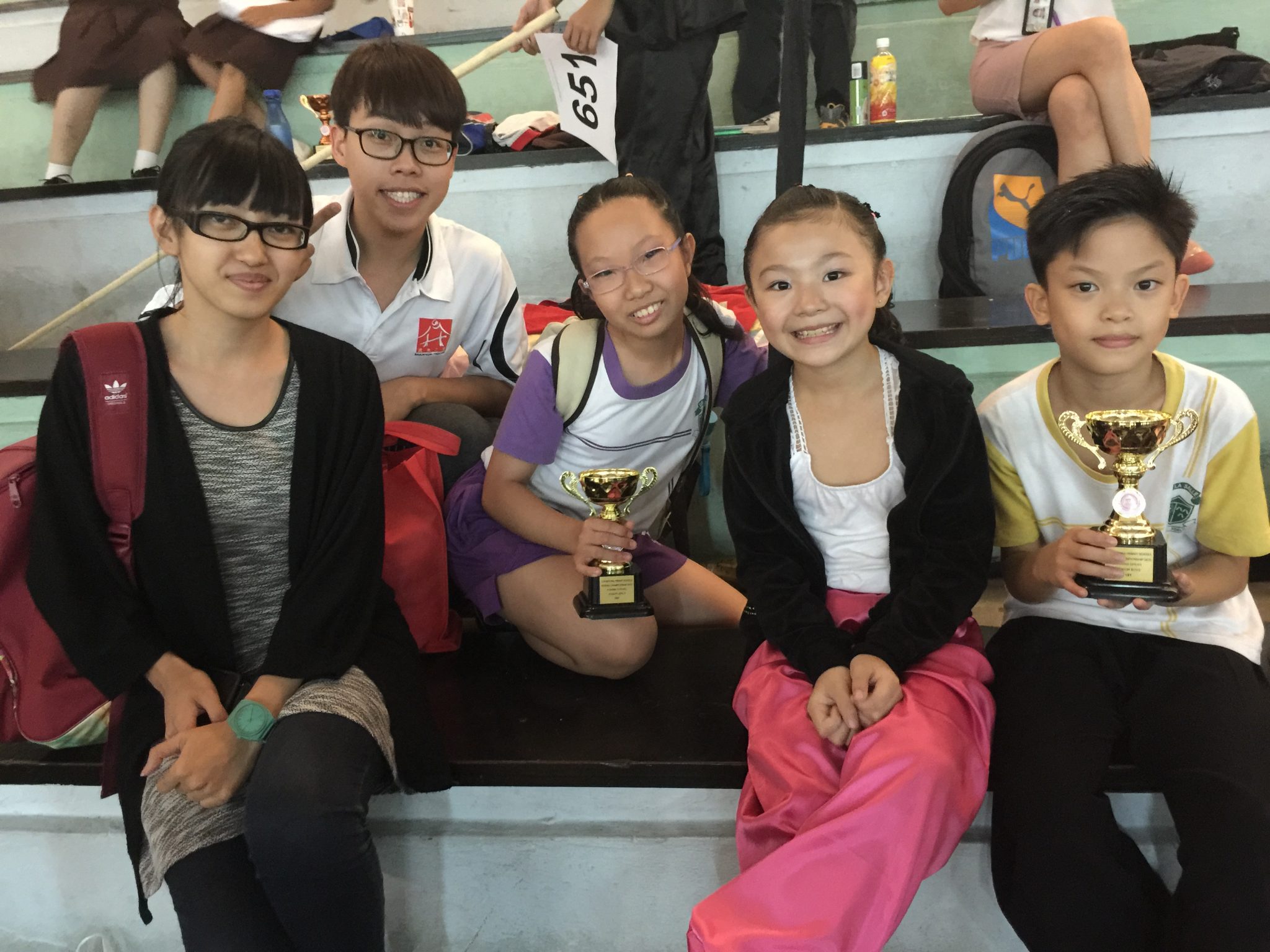 Participants had an extremely long day for today’s competition! It was a day filled with long weapon events at Toa Payoh Sports Hall. The athletes from Martial House have performed well by attaining a total of 4 Golds, 5 Bronzes and 5 3rd Runner-Ups!

Congratulations to all prize winners! Today marks the final day for individual competition. The finals will be held tomorrow at Toa Payoh Sports Hall, where the various schools will battle it out in the group events! There are 8 group events in total. Good luck and all the best! 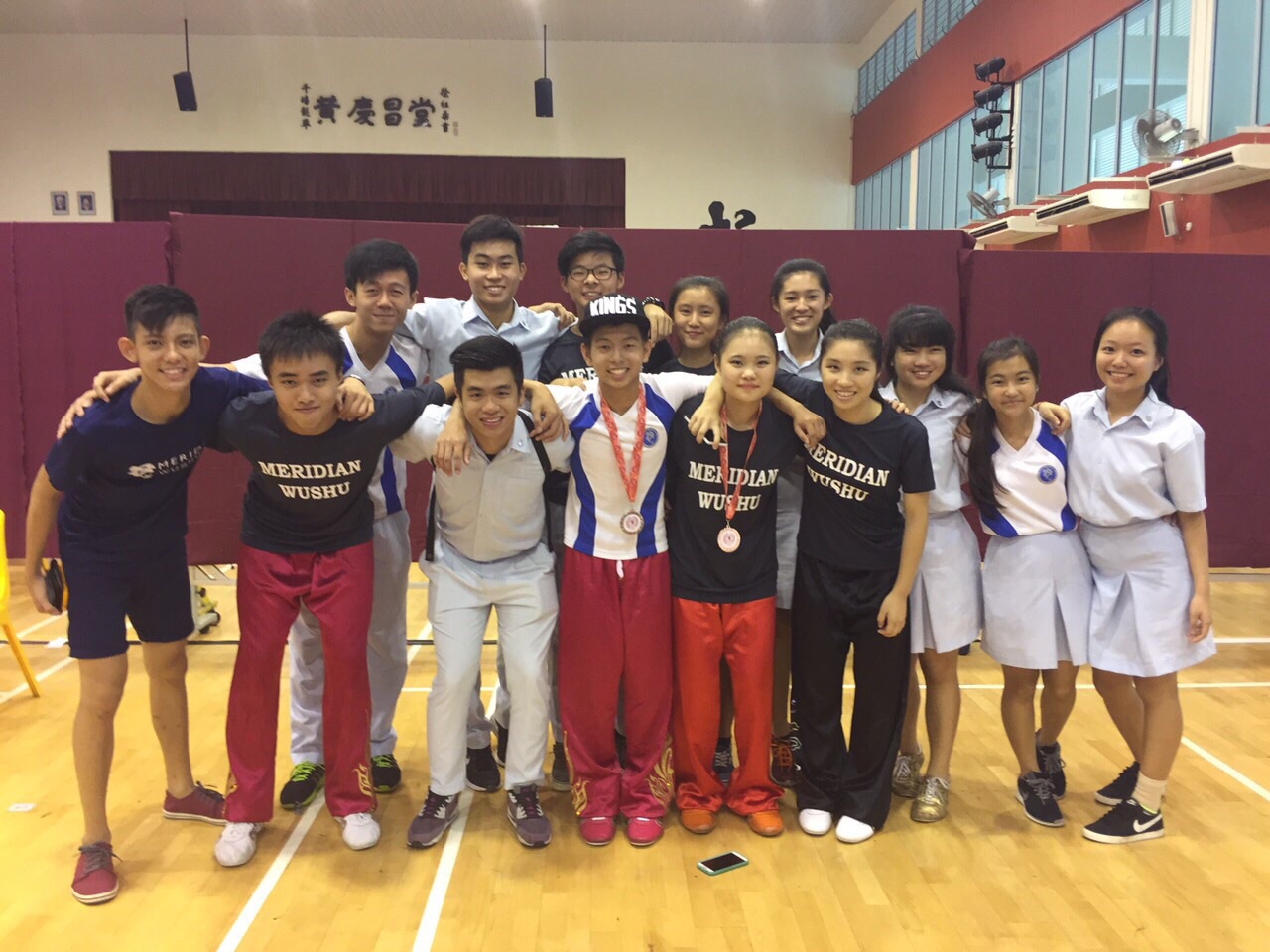 Day 2 of the 11th National Inter-School Wushu Championships 2015 was definitely intense and competitive! Despite the high level of stress the participants have to overcome, the Martial House athletes have attained a total of 1 Gold, 3 Silver, 3 Bronze and 4 3rd Runner-Up medals!

Congratulations to all medallists! Keep working hard and all the best for the upcoming events! P.S. Day 3 of the competition will resume on 6 April 2015, Monday.